[For other mosses in this series, see the Table of Contents]

To take a break from the more theoretical posts of late, I'd like to begin a series on the mosses of Central Florida, the subject of one of my current projects. This will ultimately be part of a pictorial key and guide to the mosses of this area. So far about 77 species have been recorded in our area, centering on Hillsborough County, and including the neighboring counties of Pasco, Hernando, Pinellas, Manatee, and Polk. More are sure to show up as we look more closely.

Looking closely is the key to finding and identifying the different kinds of mosses.  They are mostly small, and at first all look pretty much the same.  But there are huge differences in both vegetative and reproductive structures that make that closer look most rewarding. 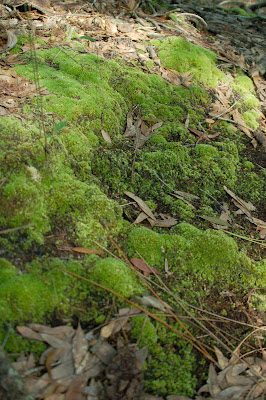 I begin with one of the most abundant species in our area, Leucobryum albidum (Brid. ex P. Beauv.) Lindb. (Family Dicranaceae).  This species forms large, conspicuous mats on the dry ground of shady pine flatwoods and oak hammocks.  Like most mosses, Leucobryum soaks up water from rainstorms and dries out inbetween.  The leaves of this species are unusually thick.  There are several layers of cells, with only the single central layer green.  Above and below are essentially empty cells that fill up with water during a rainstorm.  In most mosses, leaves are just one cell thick, and dry up rather quickly during dry weather.  Mosses in general can tolerate desiccation for rather long periods of time, and spring back to life quickly when wet. 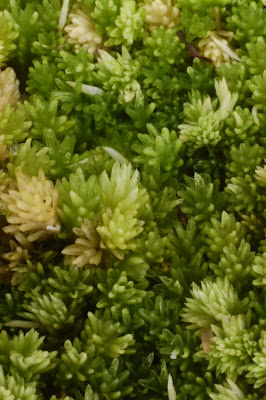 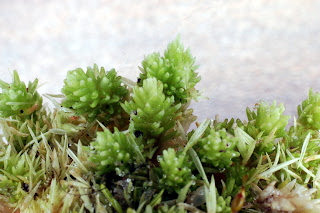 The distinctive succulent leaves of Leucobryum are short, stiff, and folded lengthwise, creating a distinct upper groove.  The leaves are crowded at the ends of upright stems, and the sporangia emerge from the tips of the stems after union of sperm and egg.  The sporangia are turned to the side and look distinctly like the heads of some kind of wading bird.

Another species, Leucobryum glaucum (Hedw.) Ångström has longer leaves, but is not as common, and grows in somewhat moister areas.
Posted by Frederick B. Essig at 12:31 PM 6 comments: