The symmetry of plants

I recently had the sad task of helping my family sort through the belongings of my late uncle Bill.  Bill had traveled a lot during his retirement, and one of our jobs was to sort through boxes of his travel photos.  One that particularly grabbed my attention, was a photo of a Ficus tree growing in Hawaii.  It reminded me not only of the magnificence of trees in general, and Shel Silverstein's book, "The Giving Tree,"  but also of the question of symmetry in plants.

One of the things you learn in introductory biology or zoology, is that there are two basic symmetry patterns in animals: radial and bilateral.  Radial, as the name implies is a circular or wheel-like symmetry, such as found in sea anemones and corals.  Looking down on the top of such an organism, you can see that it could be cut in half at different angles and the two halves would always be essentially identical.  The only requirement is that the cut go through the center.  A sea star approximates radial symmetry,  but is off in the placement of some important organs.

The alternate symmetry, bilateral, means that the animal has two sides that are mirror images, but only if the cut is made a certain way.  Most familiar animals are built this way.  In humans, if you make the (imaginary!) cut, it has to follow the spine exactly, cutting the head and torso into equal left and right halves.  Any other cut, say from left to right, results in pieces that are quite different (e.g. front and back).  To make a long story short, bilateral symmetry is an important adaptation in animals for moving around, for pursuing food or mates, or for escaping enemies.  It results in paired legs and eyes, and puts the mouth at the forward moving end.  True radial symmetry works best for animals that sit in one spot gathering food from water currents.

What about plants - do they have symmetry?  Plants don't move, so symmetry would have a different meaning, if it exists at all.  In fact it does, but it's more complicated.  Plants exhibit both radial symmetry and bilateral symmetry, often at the same time. In flowers, it has a lot to do with pollination strategy.  A sunflower head has radial symmetry, allowing small insects to land on top, while a snapdragon flower has bilateral symmetry, inviting large bees to enter from the side.

The whole plant can have one or both symmetries also, as discussed by naturalist Francis Halle (2002).  Plants that are anchored to a single spot, like trees, exhibit an overall symmetry that is roughly radial. The weight is more-or-less evenly balanced around its central axis, which extends down the trunk into a woody taproot system.  A tree could hypothetically be spun around its central axis without affecting its environmental orientation. Like a coral polyp, a tree  gathers resources -sunlight and carbon dioxide - that are widely dispersed, and so must spread a wide net from its central trunk. Of course the symmetry is not exact because of the random nature of tree branching, but overall the crown of a typical tree is a rounded dome.  This symmetry is more obvious and exact in something like a tree fern or a single-stemmed palm tree, like a date palm, though these do not have woody taproot systems.

The radial-symmetry of a tree has another dimension, a waist-like constriction, something like the shape of an old-fashioned hourglass. (Remember the Wicked Witch of the West showing Dorothy how much time she has left?)  A tree, like an hourglass, has has a broad top, a narrow waist, and a broad bottom.  the broad crown of the tree converges into the relatively narroy trunk, and the trunk then flares out into a root system that roughly mirrors the crown.  The roots of a tree spread widely in pursuit of thier own set of widely scattered resources: water and minerals. 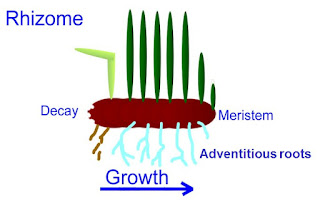 Creeping ferns, gingers, or irises, on the other hand, have a roughly bilateral symmetry.  Each stem, or rhizome, "travels" horizontally through the soil over time, with the apical meristem creating new tissues as the older end of the rhizome ages and disintegrates.  As a rhizome grows forward,  it sprouts roots on its lower side and a series of leaves or leafy shoots on its upper side.  Such a plant does in fact move, albeit slowly, and through branching can come to cover a large area and live indefinitely.  One can make a longitudinal cut along the center of a rhizome, and the two halves will be more-or-less the same. Spinning such a plant around its stem axis would result in leaves and roots alternating in the wrong environment.

The very first land plants, which probably resembled modern liverworts, had a ribbon-like structure that rested flat on the ground and grew horizontally from a primitive apical meristem.  Liverwort ribbons therefore  each have a bilateral symmetry, though they can branch to form  complex colonies.  Their distant cousins, the mosses, sometimes develop upright leafy shoots with radial symmetry.

Ancient vascular plants, like ferns and club mosses, grow from horizontal rhizomes, but sometimes have radially symmetrical upright shoots.  Creeping plants all produce new (adventitious) roots from their stem tissues as they go.  The evolution of real trees from such ancestors was a remarkable event.  Invention of secondary growth and wood was only part of the story.  The more radical change was the reorientation of the plant into a single, vertical, bipolar axis that included a woody branching root system extending down directly below the trunk, as pictured above.

Monocots reinvented creeping bilateral symmetry in their primary stems, but often have radially symmetrical upright shoots. New banana shoots, for example, sprout from short rhizomes  that have budded off of an older plant, and these upright shoots have leaves spreading out in a circular pattern that minimizes them shading each other.  Many palms, those referred to as "clumping," likewise spread by rhizomes, but send radially symmetrical shoots upwards.

The upright shoots of a few plants, inexplicably have their leaves arranged in a different sort of bilateral symmetry, that of a fan.  The most spectacular example is the traveler's "palm" (not really a palm, but a member of the bird-of-paradise family).   The leaves of a bearded iris, and even those of common daylilies also present their leaves in a fan shape.   I'm still working on why plants would adopt such a configuration.