The short answer to the question "How does water get to the top of a redwood tree" was that trees function like gigantic, complex paper towels, and that a combination of capillary action and evaporation (transpiration) maintains a moving stream of water from the roots to the leaves.  But that's only half of the story.  The other half has to do with the living cells embedded within the "paper-towel matrix."  Their survival depends upon being able to draw water and minerals from the flow around them, but they also can move water and materials directly among themselves, creating an alternate path for moving fluids around the plant.

The movement of water into and out of living cells results from a balance of forces around them: primarily evaporation and solute concentration ("saltiness").  Evaporation and salt water can both remove water from cells, but living cells also contain enough solutes of their own to draw in fresh water from the soil.  Some other factors, such as gravity in tall trees, also influence the flow of water through a plant, but for most practical purposes we are concerned only with the roles of solutes and evaporation.

I should probably begin by providing a more proper term for that spongy mass of cellulose - the "paper-towel matrix" -  that permeates the plant.  That would be the apoplast, which translates as "outside of the cells."  Basically, the apoplast is the interconnected mass of cellulose walls that surround each cell, as well as the small spaces between them, and most importantly the empty tubes of the xylem tissues.  The apoplast is all non-living material secreted to the outside of the living cells.

Living plant cells are interconnected by tiny tubes of protoplasm called plasmodesmata, and water can  move directly from cell to cell through them.   This network is called the symplast.  On a sunny day, the net movement of water through both the symplast and the apoplast is upward toward the leaves, though it is much faster in the apoplast. Thus there are two parallel, cross-connected networks running through the plant.

Evaporation is the dominant force pulling water to the top of the plant, which is normally OK, but if excessive, can be a threat to the survival of the plant. Loss through evaporation has to be balanced by water absorbed from the soil.  If the soil dries out, it becomes an evaporative agent like the atmosphere, and can suck water back out of the roots.  Even if there is sufficient moisture in the soil, an excessively hot and dry atmosphere may pull water out of the plant faster than it can move up the plant.  Plants are generally adapted to the conditions of their native habitats, but can still perish in an extreme drought.

Now,  if you stick your favorite house plant into a bucket of saltwater, it is effectively the same as sticking them into dried-out soil.  The sodium and chloride ions in saltwater are solutes, the particles that can draw water across a cell membrane. The salt water would rise up through the apoplast, but in passing by the living cells, it would literally suck them dry.  The same thing happens to us if we drink salt water. This is due to osmosis: the movement of water across a cell membrane toward a region of lower water concentration (i.e. toward higher salt or solute concentration).

Plants such as mangroves that grow in salty water have special adaptations to keep the salt away from their cells.  Some are able to filter out salt at the root surface, others have salt-excreting glands on their leaves, and still others accumulate salt crystals within their leaves, which are eventually shed from the plant. But ordinary plants without such adaptations will be killed by exposure to salt water.

Pure water at sea level and average atmospheric pressure and temperature has a water potential of zero, measured in megapascals (MPa).  That's our reference point.  The water potential of a typical, well-hydrated soil is also close to zero, but is slightly negative due to some dissolved minerals in it. The atmosphere and salt water both have strongly negative water potentials sufficient to remove water from unprotected cells.

Plant cells contain minerals, sugars, and other solutes that make them more "salty" than the water in the soil. The water potential of living plant cells varies, but is generally about -0.2 in the roots. Progressing up the stem, the water potential decreases.  A typical figure in mid-stem might be around -.6 MPa.  In the leaves, where the cells are much closer to the site of evaporation, it can decrease to -1.5 or less.  All of this varies considerably depending on the height of the plant, the external conditions, and special adaptations of the plant for its particular environment. 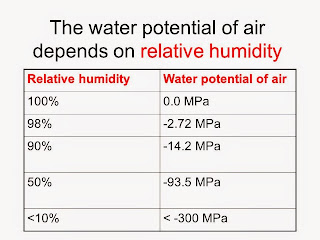 The atmosphere is usually pretty dry but that depends on the relative humidity.  Saturated air, on a damp, foggy night for example, will have a water potential near zero, and not much water will flow.  Typically though the water potential of the air will be -100 or lower.  Hot, dry desert air can have a water potential as low -300 or even -500 MPa.  This then sets up a gradient from the soil to the top of the plant that drives the flow of water.

Salt water (with salt concentration of 3%)  has a water potential of about -25 MPa (Tomlinson 2004), much more negative than the typical living plant cell.   Remember that water can flow either direction across a cell membrane, from whichever side has the higher water potential, as a result of osmosis.  Salinization of agricultural soil is a big problem in dry climates where irrigation water evaporates, leaving ever higher concentration of salts in the soil.  It becomes a necessity to seek more salt-resistant plants for continued productivity in such regions.

Something similar happens if you water a potted plant repeatedly without letting the excess water drain from the bottom of the pot.  Mineral salts in the water accumulate, making it harder for the plants to absorb water from the soil.

At maximum turgor pressure, such as on a foggy night when there is no evaporation, the turgor potential and solute potential can balance out, resulting in a water potential near zero throughout the plant and no water movement.  But on a sunny day, evaporation creates a net upward flow of water  that runs through the symplast as well as the apoplast, so maximum turgor pressure is not reached.  This leaves the net water potential of the cells of the root negative enough to continue pulling water from the soil.

"Reverse osmosis" is a process for purifying sea water by applying sufficient pressure to overcome the solute potential of the seawater, forcing water molecules, but not salt particles, across a membrane similar to that which surrounds every living cell.  Such a membrane is called semipermeable.

Tomlinson, P. B. 2004.  The Biology of Mangroves.  Cambridge University Press.